Discontinuation of USB sticks for the ESCON and MAXPOS products 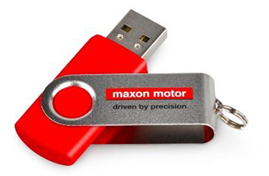 maxon are discontinuing the USB sticks supplied with the ESCON and MAXPOS products. The information is instead available online.

When customers purchase MAXPOS or ESCON products they have the option to purchase a memory stick of all the documentation, corresponding firmware and software. The demand has decreased significantly for these USB sticks and therefore maxon will discontinue to manufacture them. Instead this information is available online at the maxon motor website. The current setup, product information and supporting documentation are accessible for free download at:

For customers who wish to order the USB stick maxon is accepting orders up until July 31, 2019 and the last dispatch date will be January 31, 2020.

Cables tell the story of how much technology can be packed into a 13mm stainless steel tube.

Small brushless servo motor, sounds simple? But there is a lot more to this particular servo.

Looking at the picture the welded stainless steel construction makes the quality of the motor instantly recognisable but it’s the custom Teflon cables that really tell the story. Hidden inside this 13mm diameter housing is a brushless DC motor that can continuously run at speeds of 120,000 rpm, hall sensors for rotor angle detection, an internally mounted 4096 quad count 3 channel encoder with line driver, and a high speed planetary gearhead. Including the three phase winding cables that is a total of 14 cables sealed into the 13mm sterilisable housing. To give an impression on how dynamic the servo system is, the motor itself can accelerate from zero to 40,000 rpm in under 2 milliseconds. The motors are finely balanced to achieve quiet operation below 47dBA at 50,000rpm, low vibration and minimal heat dissipation. This is supported by the 89% efficiency rating.

Requiring up to 22Nm of intermittent torque with only a tiny amount of available space, only maxon motor could custom build the perfect solution for this application. The brushless DC motor contains an internal 1024cpt encoder and is only 22mm long.

Outrunner style pancake motors have an external rotor which offers both advantages and disadvantages. The brushless DC motor has the rotor magnets mounted on the outside of the stator giving the motor more available torque via the additional distance between where the force is produced and the shaft. Essentially, more leverage. However, having an external rotor leaves the rotating mass exposed to the operating environment where it could potentially be impacted upon and create imbalances on the motor.

maxon motor were able to combine a unique combination of a flat brushless DC motor with an internal 1024 count per turn encoder with a ceramic planetary gearhead to meet a customers’ application requirements, though the exposed rotor was a concern for the engineer. By re-designing the front mounting flange of the motor, maxon were able to build a custom rear cover for the motor to protect it and stay within the maximum 43mm available diameter. This must be designed around the thermal requirements of the motor when working in the application environment under the specific loads and duty cycles.

Customisation processes like this for specific requirements then become available for other applications and eventually catalogue components. The motor is now available for system voltages from 12V to 48V with internal encoders from 256 counts per revolution to 2048 counts. There is a ventilated version for high power density, a standard version and an enclosed version.

Current Defenders of the America’s Cup, Emirates Team New Zealand, will be competing in the 36th America’s Cup Match in Auckland from 6-21 March 2021. maxon motors’ technical assistance will be a key factor towards success.

maxon motor is delighted to announce that it will be an Official Supplier to Emirates Team New Zealand for the 36th America’s Cup Defence, including the America’s Cup World Series events and Christmas Race. Three times winner of the America’s Cup, Emirates Team New Zealand were the first non-American competitor to successfully Defend the trophy. Their vigorous defence of the 36th Americas Cup will be assisted with the support of maxon DC motors.  The America’s Cup AC75 Class Rule allows the use of electric motors to operate hydraulic valves, drive clutches, rudders and foils. Teams may also use motors for driving simulator platforms and numerous test jigs.

Emirates Team New Zealand Design Engineer, Luke McAllum said “In our search for a compact, and powerful electric DC motor, maxon motor stood out head and shoulders from its competitors. During the initial specification and feasibility studies the team at maxon motor Australia have been outstanding and very knowledgeable. We are looking forward to an exciting and innovative collaboration over the next two years developing key components on the race boat in our quest to defend the America’s Cup.” 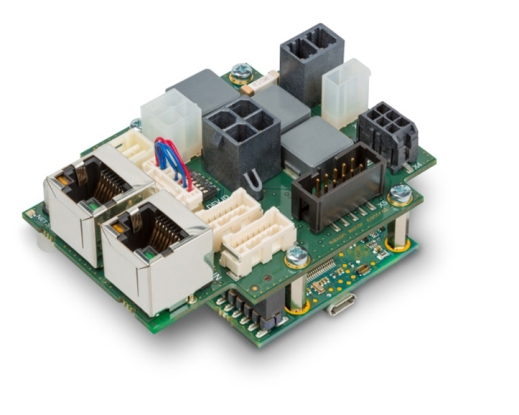 Maxons compact controllers now speak another language: the new EtherCAT models comply with the CoE standard (CAN application layer over EtherCAT) and can be easily integrated into existing EtherCAT networks.

The new, intelligent motion controllers with realtime communication offer a simple, plug-and-play solution for controlling brushed DC and brushless EC motors with peak currents of up to 30A. With their modular design, they are particularly suited to applications with single or multi-axis systems in small devices and machines as well as robotics.

Also available is an extensive range of accessories to make the connection and integration process as seamless and easy to use as possible. Besides the intuitive “EPOS Studio” software, Windows DLL and Linux Shared Objects Libraries are also freely available for incorporating the controllers into a variety of master systems. As well, a detailed range of product documents are readily available.

The versatile EtherCAT controllers are available immediately in two power versions: 50V/8A and 50V/15A. Other variants in the Compact series (EPOS4 Compact 24/1.5 EtherCAT & EPOS4 Compact 50/5 EtherCAT) will be available by the end of 2018.

maxon motor is excited to announce the acquisition of British gear motor manufacturer Parvalux Electric Motors Ltd. This expands maxon’s product portfolio and introduces new capabilities within the medical technology and industrial automation fields, amongst others.

maxon motor acquired the British-based Parvalux Electric Motors Ltd. Parvalux has been in operation for more than 70 years and offers brushed DC motors, AC motors and gearheads. Covering three production sites across the UK and with more than 185 employees, Parvalux generated revenues of £23 million annually with exports reaching approximately 40% worldwide.

In turn Parvalux benefits from maxon’s global sales network for its continued growth, and plans to expand the business’s workforce. The management board of Parvalux remains unchanged and an agreement to keep the price of the acquisition will remain confidential.

Another alignment between maxon and Parvalux was their vision to provide highly customised solutions tailored to individual customer requisites. maxon’s strategy of long-term sustainable growth is evident in this partnership. “We want to be a long-term market leader in the drives market and offer our customers the best service possible,” says maxon CEO Eugen Elmiger. Chairman of the board of directors Dr. Karl-Walter Braun adds: “I’m confident that Parvalux will contribute to this goal with its know-how and high quality products, and that the company will prove to be an outstanding addition to the maxon world.”

Error: Twitter did not respond. Please wait a few minutes and refresh this page.